Vietnam was a destination we had had planned to visit when we eventually travel long-term through Asia. However, we had some friends from university who were travelling and invited us to meet them. Again we were very lucky that we live in a Taiwan because flights were short and cheap (£100).

We flew to Hanoi and met our friends who were flying in from Dubai, we got lucky that our flight arrived early and we ended up running into them in the baggage hall. After being away for a year it was so good to see familiar faces! We booked an Air BnB apartment for one night and spent quality time catching up. We also found a traditional Vietnamese buffet restaurant which served a huge range of food to suit everyone’s taste buds, including a great BBQ. 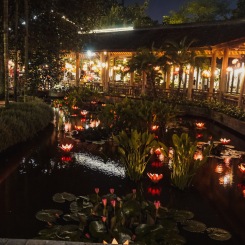 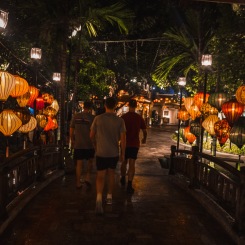 They had booked the Vietnam Backpackers Castaway island tour to Ha Long Bay. We initially thought it was over priced (about £180 for 2 nights) but it turned out to be one of the best trips we’ve done so far. We met at the hostel at a difficult time of 6:30am to embark on the lengthy trip to the bay. The journey started off with a 4 hour coach ride (with rubbish aircon), followed by a small ferry boat for about 45 minutes, then a wait at a cafe/bus station, a mini bus ride for an hour to Cat Ba and finally the Castaways boat to the island in Ha Long Bay. The journey was long to say the least but it was definitely worth it. Although it was raining we cracked open the beers on the boat and took a wonderful cruise through the bay, arriving at the private island which was what dreams are made of. 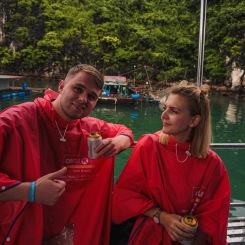 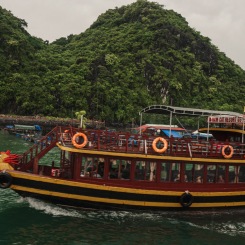 We had read a lot of reviews about Castaways and was prepared for the worst. We expected dirty huts, showers, rats and no aircon but we were actually impressed by the facilities that had been built on the island. Many people described it as a ‘party’, and it definitely was centred around fun and alcohol from the get go. We appreciated that it felt like you had washed up on a deserted island and had to socialise and make fun for two days! There was no wifi or service which made it feel like we were the only people in the world. 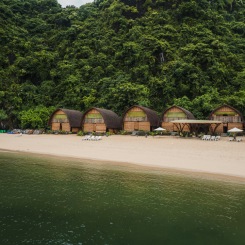 The first afternoon we did tubing and rock climbing, played volley ball, frisbee and swam in the cool green water. After dinner the communal dining hall turned into a social hub and dance floor where things got pretty wild. It’s a good thing there were no neighbours to complain. The reps were incredibly friendly and did a great job at making everyone feel welcome and relaxed. One of the best things was that no one was on their phones, snap chatting or uploading pictures which made the place feel secluded.

The second day we got ourselves up for breakfast, lined our stomachs and set out on the boat cruise at 10:30am. We sailed around Ha Long Bay, admiring the spectacular rock formations, fishing villages and sea views. We stopped at a number of view points where we were able to jump from the boat and swim in the most beautiful water. BEWARE; the water was infested with jellyfish, throughout the day about 10 people got stung by jellyfish and we could actually see them in the water around us. From the boat we were helping each other out and telling people what areas to avoid. But don’t let that put you off because swimming was the best part of the day and what’s a jelly sting amongst a whole day of fun?

Side note; if you do happen to get stung, apparently urine has little to no effect on relieving the pain so don’t let anyone trick you into getting peed on. 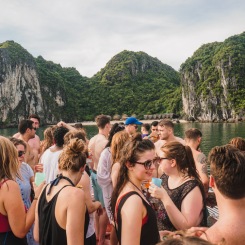 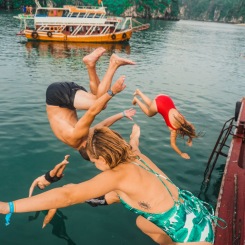 We stopped and took a kayak tour through some caves and bays which was incredible and so much fun. It was something we had always imagined ourselves doing and it didn’t disappoint. After lunch on the boat we also stopped near a small beach and were able to swim to an island, relax and really take in the surroundings. For a moment you forget about life outside of that beach, we wished we could stay there forever. We’d seen a lot of pictures of the bay but none compare to the feeling of being surrounded by the emerald green water and vast rocks. They are spectacular.

By the time we returned to Castaways island everyone was in peak high spirits and it continued that way all night.

The next day we returned to Hanoi after the terrible journey back. We went to Phõ 10 for traditional beef noodles, wandered around the busy streets and shops for a while and spent the last evening at the Downtown Backpackers hostel. We didn’t sleep here but we thoroughly enjoyed their facilities and got some great ideas for future trips from their tours. 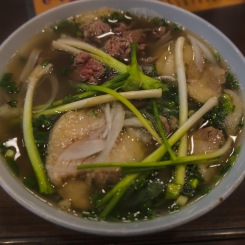 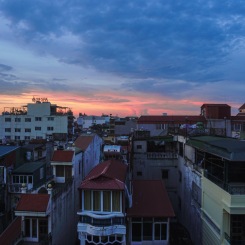 Hanoi is a crazy city, full of tourist and quite dirty, so we wouldn’t recommend spending more time than you need to there. It’s a good central area to travel to other destinations and it has plenty of bars and international restaurants to enjoy. Since being in Asia we saw more foreigners in Hanoi than we have the whole year in Taiwan so it was nicely familiar for us.

Our Ha Long Bay experience was more than we’d ever expected and it was the most fun we’d had in a long time! If you hate fun, don’t bother going to Castaways Island!

There was an error retrieving images from Instagram. An attempt will be remade in a few minutes.